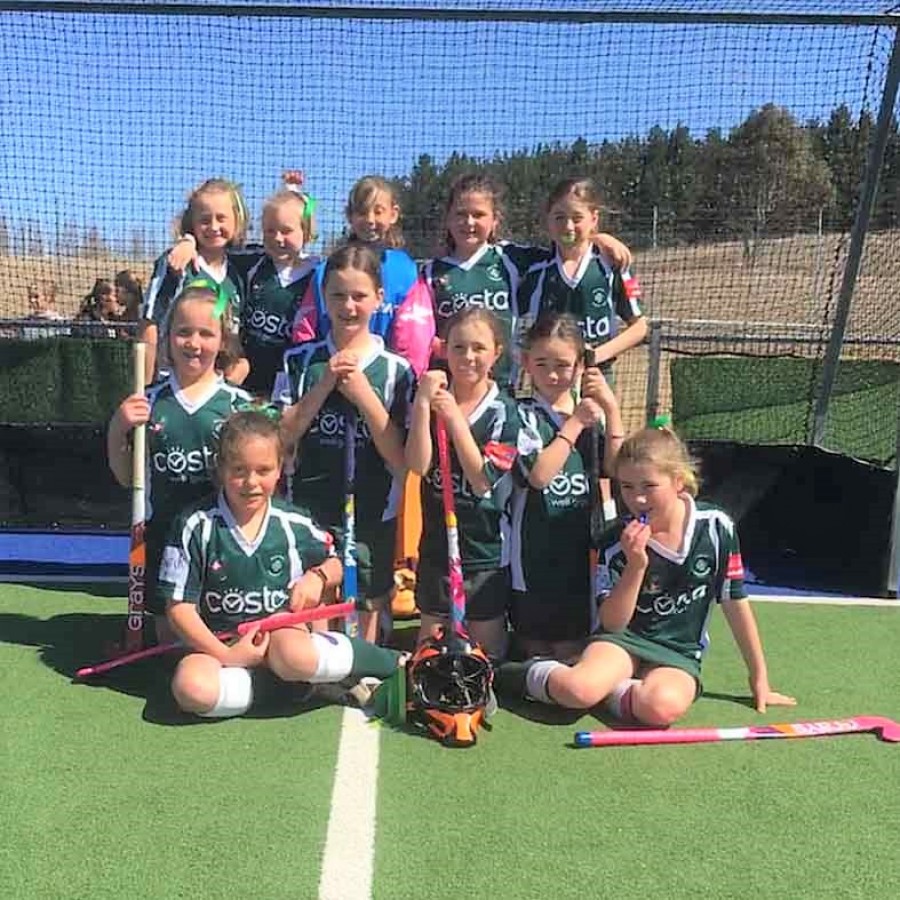 The Guyra Shamrocks Under 11 hockey team played in a nail biting game against ESC in the Grand Final on Saturday. With the score at the end of the game being 1-1, the game went into 10 minutes extra time with still no change in the score and both teams were awarded joint premiers. Both teams played and an extremely strong game and it was well deserved by both teams.
Backs Tessa Jackson, Matilda Coddington, Abbey Grills and Freya Bray had a busy game showing their brilliance at blocking and clearing the ball. Goalie Annie Williamson cleared many balls and worked well at positioning herself in the goal box and the backs were a great support for Annie. After a quick goal from ESC Guyra came fighting back with a goal scored by Jemima Atkin. Jemima fought really hard for this goal and continued to fight the whole game with many shots at goal. Jemima’s skills have improved so much this season and she has proved herself hungry for goals and makes herself available in defence and attack. Camilla Grills put all her strength and determination into the game with no fear on her tackling. She played many great balls that were sent out wide to her and had some great passes to set up play at many attempts at getting another goal. Stevie McElroy once again proved that she deserves her place on the wing. Stevie received some amazing passes and set up a lot of good play for her team mates with strong passing and calls. Centre players Ella Turner and Ursula Geere never gave up sending many balls out wide to Stevie and Camilla and showed a lot of fantastic team play with passing and setting up many great moves of play. Both girls placed themselves well on the field and made themselves available to attempt to score.
Guyra had numerous great shots at goal from many short corners that they worked hard for. They ran the whole game and their determination to keep majority of the ball was brilliant. Mid fielder Ashlee Morgan once again showed how fantastic her skills are with many great runs of the ball and passing off to team mates. Her fantastic skills helped set up our many corners. Ashlee’s passion for the game showed as she worked hard to get the ball in goal box. She showed great strength in all her tackles.
The massive crowd were on the edge of their seats with this energetic game that showed the passion of these kids and the magic skills that they all have developed. The cheering on the sideline was brilliant. Both teams thrived in this atmosphere and the score reflected the talent of both teams.
Well done Guyra Shamrocks Under 11s - you have been an absolute pleasure to coach and watching all of you develop brilliant skills and a passion for the game has been fantastic. You have all played brilliantly as a team consistently all season. You have stood out with your sportsmanship with every game. Well done and I look forward to doing this all again next year!!
Jenette Williamson