Caspers top of the table 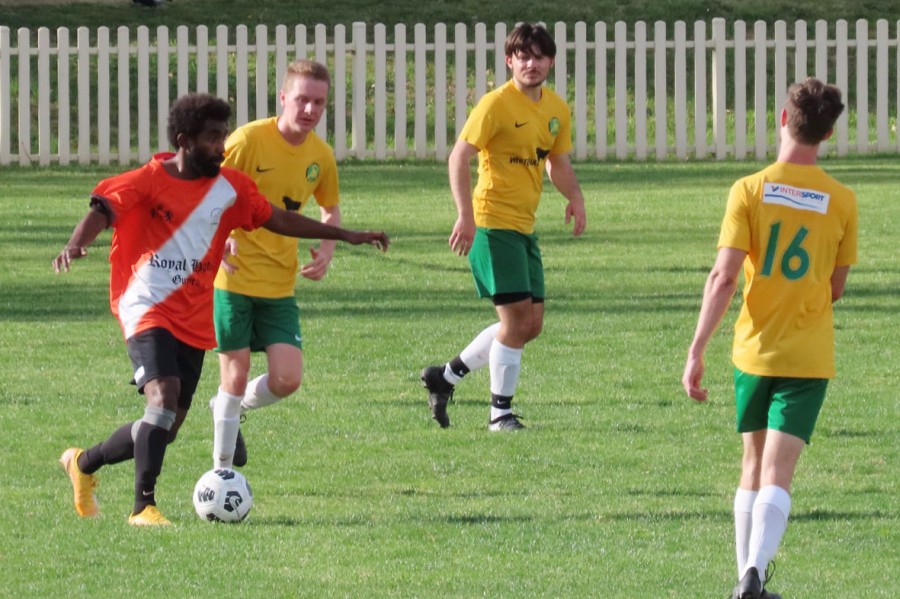 After a week off Guyra came up against second on the table South Armidale in strangely warm and very humid conditions. Guyra started the game very slow and steady and a highly dubious call from the referee in the first 15 minutes gave the Scorpions a direct penalty. Des chose the wrong way in the goals and Souths were on the board 1-0.
Raid after raid on Guyra came to a halt with all backs playing their hand in this - well done fellas!! Guyra enjoyed the last 20 minutes of the half with majority of the ball and were extremely unlucky not to get one or either two goals on the tiring Souths outfit.
Change of sides and this seemed very much in the favour of the Caspers. Wonderful ball control and passing was exhibited in the first stanza of the second half.
Guyra were holding their own ground all over the park and really stamped their authority on the game right from the start of the second half. Spreading the ball from right to left and back again really stretched the Souths defence. They could not hold on any longer, and goal machine Normie thumped one home in the top right corner. This goal really pricked up the Guyra attack and Guyra’s second goal started right in the backs and went through almost everyone on the Casper’s. Yet again Normie calmly worked his magic to round the keeper and so delicately tapped the ball over the line and pretty sure it didn’t even hit the back of the net. Guyra 2-1 up.
Solid defence was in order for the rest of the game with the midfield in Jake and BJ really controlling everything. Nick and Ben in the backs never showed the opposition anything available. This win has kept Guyra on top of the table. Come and watch this team if you have some spare time. They really are playing some exceptional soccer at the moment and will only get better with time.
Third Grade had a very close game against second on the ladder East Armidale with the final score 5 - 4 Guyra getting the win and remaining on top of the table. Goals scored were Rexly Tasso 3, Keegan James 1 and Hudson Felani 1.

Old boys run out of steam
The over 35’s took on Westside once again in Armidale and began the game brilliantly totally controlling the possession. They were rewarded in the 20th minute with a well rehearsed goal to Adam Litherland. That goal was quickly followed by a great strike by Adam Raper, sorry by Hayden Mendes to take the score to 2-0 at half time.
The boys were hurting at half time and as the second half went along Westside were getting back into the game with the Caspers falling like ten pins.
Westside scored two quick goals, but the Casper men held on for a hard fought draw 2-2.
Although disappointed the Caspers still had energy to blast out a few tunes on the bus on the way back up the hill to keep all the passengers wiggling.