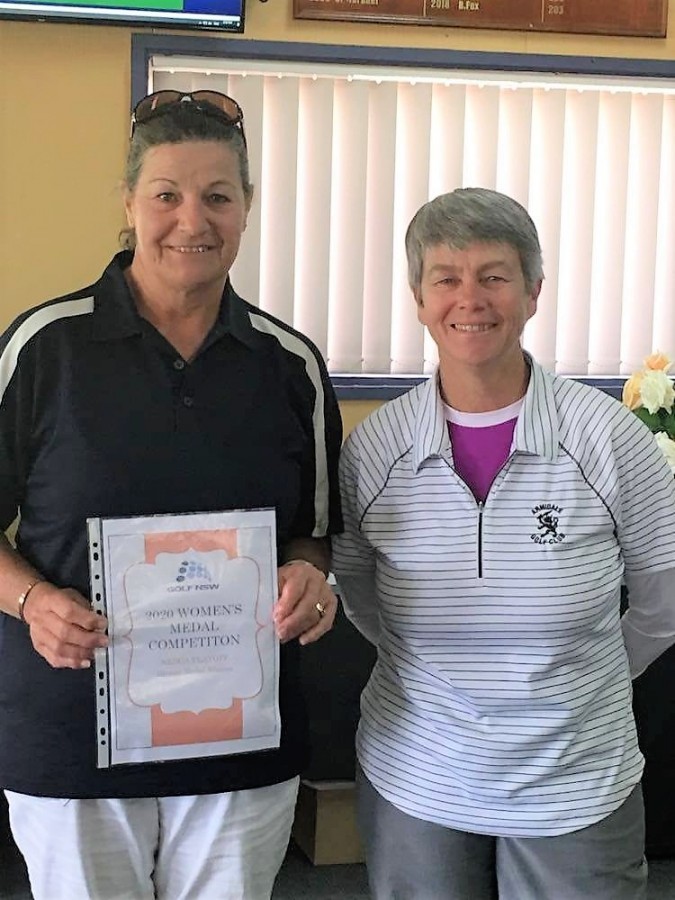 Ladies’ Golf
Last week some ladies from Guyra travelled over to Inverell to play in the Golf NSW Medal Playoff.
Jenny Tierney won her Division and will now travel to Stonecutters Ridge in Sydney to play in the State Final.
In Guyra last week the ladies played a Stableford with Pip White winning on 36 points. The runner up was Donna White on 35 points winning on a countback.
Nearest the Pin winners were Shona Mulligan on the 7th and 9th holes, Pip White on the 10th hole and Belinda Lenehan on the 18th hole.
This week is a Par Medal Round with Debbie Burey as the sponsor. Next week the ladies will be on the annual golf trip which we are all looking forward to.
Birdie

Men’s Golf
On Sunday the Guyra open was played and thanks must go to the sponsor the Guyra Pharmacy. The winner with 77 was Daniel Holley from Emmaville with Darrin Towells runner up. A grade nett winner was Jake Ellis with Richard Burey runner up. B grade was taken out by Mal Gaukroger with Mick Kirk runner up. Peter Presnell took out C grade from Roger Grills. Nearest to the pins were Peter Presnell on the 7th, Jake Ellis on the 10th, and Neil Paine on the 18th. The long drive was won by Jake Ellis.
Next Sunday thé 4 Ball championships will be played as well as thé final of the monthly mug. The qualifiers are Pat Grills, Chris Newberry, Peter Jackson, Steven Sole, Len Stanley, Ian Taylor, Scott Mendes, Steve Kliendienst and Peter Presnell.
The Albatross.

Vets Golf
Twelve Vets played an Individual Stableford event on Tuesday, 20th of October. It was a very pleasant day for golf and we were pleased to welcome  Steve Spooner, from Armidale, and hope he enjoyed playing in Guyra. We were all impressed with the improvement of the greens and the surrounds after such a long dry spell.
The winner of the day was Len Stanley, on a countback from Ken Fuller, each with a great score of 38 points. Nearest the pins were awarded to Ken Fuller on the 7th, Roger Grills on the 10th and David Bearup was closest to the pin on the 18th. The best putter of the day was Mick Shiner, with only 26 putts.
Four Guya Vets travelled to Armidale and played in their Open Day on Tuesday and six of our golfers drove to Walcha on Friday for an Individual Stableford Open Day.
The Guyra Vets will be hosting the New England District 4 Ball Championships on Tuesday, 17th of November. Guyra Vets who did not qualify to play in the Championship will be able to follow the field. Lunch will be available at the Club.
On Melbourne Cup Day, Tuesday 3rd November, starting after 9am, we will play a 2 Person Ambrose for anyone, even if you don’t have a golfing handicap. All proceeds will go to CAN ASSIST. The cost will be $20, which includes a light “covid” snack and a free ticket for the big race.
There will be great Raffle Prizes, so find a partner, enjoy a game of golf and perhaps win a few dollars as well.
A Vet

Midweek Golf
Nice to see some rain but most of us fitted in our midweek in before the storms. Top score this week went to Peter Presnell with 26 points - well done.
Debbie Burey scored well again this week with 22 points. Also with 22 was Peter Mulligan. Quite a few scored 20 and 21 and these were Matt McFarlane, Luke Brazier, Lisa Ellis, Wendy George, Bob Burey, Peter Jackson, Darren Lennon, Richard Burey, Paul Redden, Derek Smith, and Jason Waters. Great start.
Thanks to everyone for putting their team names on the cards. There was only one card with no name and with a process of elimination we eventually found the culprit.
Six teams have earnt extra points this week with all players putting in score cards for their teams.
• Please check your handicap. Most will change every week.
• Reminder that it is a 9 hole competition NOT a seven hole.
• Also if playing your mid week when playing in another competition you must nominate which nine before you commence play. Not decide at the end of the competition day’s play.
Middy

Men’s Bowls
Saturday October 24th saw the Zone 3 Triples played at Guyra. Even though the weather was not conducive to Bowls the games went on. This was due to the fact the greens at the Guyra Bowls Club are all weather greens and can be played on in almost any weather conditions so a little rain was not enough to call the Bowls off.
Robert Walls, Scott Campbell and Steven Sole played R Ellis, G Coyle and D Hungarford. In this game Steven’s team were defeated 26 shots to 20 shots over 25 ends.
In the Final: Col Stanley, David Wilcox and John McIlwain played R Ellis, G Doyle and D Hungarford. The result of this game was a win to D Hungarford and team, 20 shots to 19 shots over 25 ends and a good soaking.
On the local scene, Sunday October 25th in the Major/Minor Pairs David Wilcox and Paul Johnson played Roger Cox and Boyd Stanley. David and Paul were away to a great start opening a lead by end 5 and seemingly had the game in hand but alas they could not continue the form and Roger and Boyd found their form and closed the gap. From then on Boyd and Roger took control and finally took a victory 25 shots to 19 shots over 25 ends.
The other game played was the Final of the Minor Singles played between John Jackson and Mallie Walls. Mallie found the green to his liking and soon opened a lead only to see John come back and from then on the game developed into a real dog fight with both players taking command at different times. It would come down to which ever bowler could open a lead. John put his head down and by end 29 had a handy lead but Mallie with his never say die attitude fought back and came home with a wet sail to take the win 31 shots to 27 shots over 32 ends. Congratulations to Mallie on his win and become Minor Singles Champion for the 2019/20 season.
Now to this weekend’s fixtures:
Saturday October 31st: Start: 1.00pm. Starter and Umpire: Andrew Sparke.
Handicap Singles: Barry Walls to play Andrew Sparke marker Mallie Walls.
Sunday November 1st: Start: 12.00pm.
Social Pairs, Box Draw. Everybody welcome: To play cost $5.00. A Bowls shirt to worn if possible. Names by 12.00pm for a 12.30pm start. Prize Money $200.00. Minimum of 16 players required to play.
I have been asked to remind Bowlers that the nomination for the 2020/21 season will close Sunday November 1st so if you haven’t put your entries in, then remember time is running out, don’t miss out act now last chance.
The Bowls Bandit