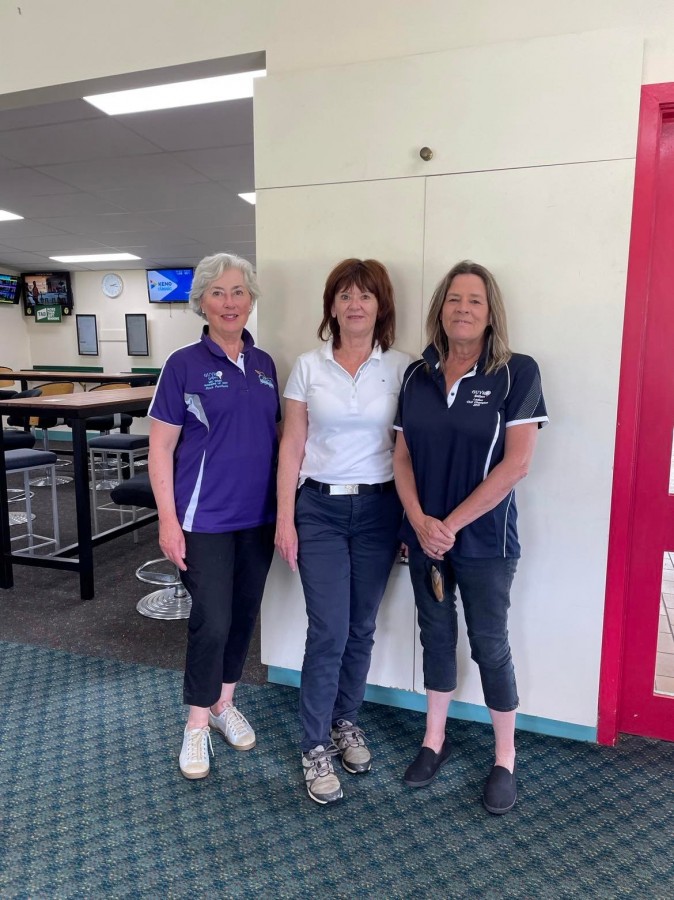 Last week was the final round of the Ladies’ Championships. The Ladies’ Champion for 2022 is Vicki Reeves. A Grade Champion is Karen Oehlers. C Grade Champion is Julie Walker. The Nett winner for 54 holes is Lisa Ellis. Congratulations to our winners.
Nearest the Pin winners were Karen Oehlers on the 9th and 18th holes, and Vicki Reeves on the 7th hole. This week is the Guyra Ladies’ 4BBB Open Day. Next week is an Individual Stableford and the 2nd Graham Betts Round.
The starter is Vicki Reeves.

Men’s Bowls
Two games were played on Sunday. In a close game of open singles Anthony Bull proved too strong for John Jackson winning 31-24 .
In a game of major/minor pairs between Boyd Stanley and Roger Cox playing David Wilcox and Paul Johnson. Boyd and Roger had the game in the bag with a couple of ends to go,
only to be run down by some great bowls and a bit of luck, David and Paul winning by one shot 24-23.
Games set down for next Saturday 26th February at 1:00 pm: In open singles the in form Michael Shiner will play Andrew Sparke with Robert Moore to mark. David Wilcox will play Barry Presnell with John Jackson to mark. A game of major/minor pairs will also be played between Scott and Barry Campbell playing  Steven Sole and Robert Walls.
Jack.

Men’s Golf
On Sunday an 18 hole stableford was played for a club trophy. Mal Gaukroger was the winner with 38 points, John Prisk was runner up. Nearest to the pins were Mal Gaukroger on the 7th, John Prisk on the 10th, and Scott Mendes on the 18th.
This Sunday the 27th February a 2 person ambrose will be played and is a qualifying event for the club Keno championship to be played at a venue to be decided.
There will be a men’s and a mixed teams on Sunday and the top qualifier in each category will progress to the next stage.
The Albatross

Vets Golf
Last week the 15th February, 14 players enjoyed the great weather to compete in an Individual stableford counting putts. The winner on the day with a great score of 40 points was Ian Taylor, very closely followed by Nancy Prisk with 39. Ian was also the best putter with 26 putts.
Nearest the Pins went to Paul Redden on the 10th, Chris Newberry on both the 7th and 18th, and Nancy Prisk on the 9th.
Last Friday a small but enthusiastic team went to Uralla to compete in their Open Day and came home winning C grade. Let’s hope the form continues tomorrow when we play the second round of the New England Pennants at Walcha.
Next Monday and Tuesday will be our Open Days so let’s put on a great show of strength.
A Vet

Midweek Golf
Another fine week for golf. Not everyone got the chance to play – apart from having other things on, forgetting to do it and Covid isolation, it really plays havoc with getting a game of golf in.
Highest score this week went to Julie Walker with 27, congratulations. Next on 26 were Lisa Ellis and Wendy George then David Brown on 25. Derek Smith and Richard Burey both had 24 points. Many players had over 20 points this week.
Highest team score for the second week running went to Full House with 95 points. Great score.
Lots of birdies happening lately. Very hard to come by for some of us.
With only a few weeks left before the conclusion of midweek we have decided, rain hail or sun, the scores will be counted every week and no extension of time to get your mid week played.
So hopefully we get a few fine days every week to wind up the mid week competition.
Middy