Carnival over for another year

Well the 30th Guyra Annual Bowls Carnival has come to a conclusion for another year. The Carnival started on Tuesday December 3rd with the Women’s Open Triples. There were 16 teams that played and after two Rounds the winners were Laverne Apthorpe, Elfie Brunner and Pam McFayden (Armidale Ex Services) with two wins + 37 points. Runners Up were Barb Cullen, Rhonda Burrell and Gwen Davidson (Kootingal) with two wins + 27 points. The Mystery Prize went to: J Rizzi, J Sly and J Cross (Walcha)
Wednesday December 4th, saw the Mixed Triples played, with 16 teams that venturing onto the greens
After two rounds of 16 ends the winners were Russell Johns, Pauline Johns and Dianne Richter (Armidale Ex Services) with 2 wins + 40 points. Runners Up were Phil Ross, Belinda Emerson and Brian Thomas (Inverell Sports) with 2 wins + 9 points. The Mystery Prize went to: Jenny O’Neil, Ken Jones and Jill McEwen.
Thursday December 5th saw 32 teams step onto the greens to play the first three rounds of the Schweppes Pairs. After the three rounds five teams were going into Friday December 6th with three wins.
After another two rounds it came down to the best four teams to play the Semi Final. They were Dan Kennedy and Chris Kliendienst with 5 wins + 55 points. Anthony Bull and Robert Walls with 4 wins + 55 points, Col Stanley and Mick Pennell with 4 wins + 56 points, Mick Ashford and Ken Jones with 4 wins +50 points.
Winners of the Semi Final were: Mick Ashford and Ken Jones. Col Stanley and Mick Pennell with Col Stanley (Guyra) and Mick Pennell (Armidale Ex Services) the eventual winners.
Saturday December 7th saw 32 teams play the first two rounds of the Regional Australia Bank Triples, with the third round played on Sunday.
The competition was separated into eight sections of four teams and after three rounds of play the eight Quarter Finalists were determined.
They were: Steve Clark and team (Mona Vale), Col Stanley and team (Composite team), Scott Hamilton and team (Inverell Sports), Craig O’Toole and team (Kootingal), Jade Barlow and team(Composite team), Stewart McLeod and team (Mona Vale), Rod Hummelstead and team (Mona Vale) and Adam Ross and team (Composite team).
The semi Finalists were Col Stanley, Scott Hamilton, Jade Barlow and Adam Ross. Scott Hamilton and Jade Barlow and teams went on to play each other in the final and the eventual winners were Scott Hamilton, Russell Berghofer and Joe Bell (Inverell Sports) with Jade Barlow, Scott Dodd (Inverell Sports) and Steve Matheson runners up
I would like to thank the sponsors: Schweppes, Regional Australia Bank, BCIB Bowling Club Insurance Brokers, Aristocrat, Hotel Liquor Wholesalers, Jacobs Creek, Tooheys, Asahi, Grant Burge Wine, Stanley’s Hot Bread Shop, Geoff and Bertha Reeves, Barry and Helen Presnell, David Wilcox.
Without Sponsors the carnival would not run and be the success that it is.
I would like to thank all the people behind the scenes that make this Carnival the success that it is, if I start to name these people I am sure to forget someone, so I will thank all those involved.
A reminder to all bowlers the Brian Vickery Ham Day will be held on Sunday December 15th. Names to be in by 12.00pm for a 12.30pm start. Bowlers are asked to wear a bowls shirt if you have one.
The Bowls Bandit 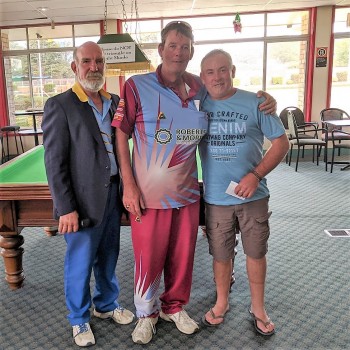 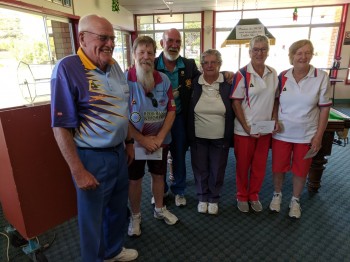 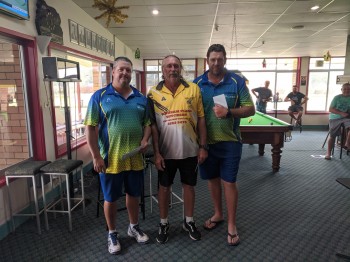 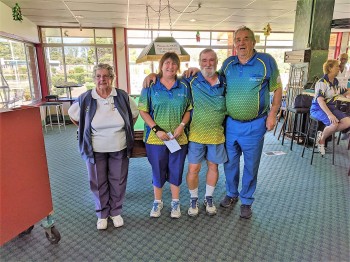