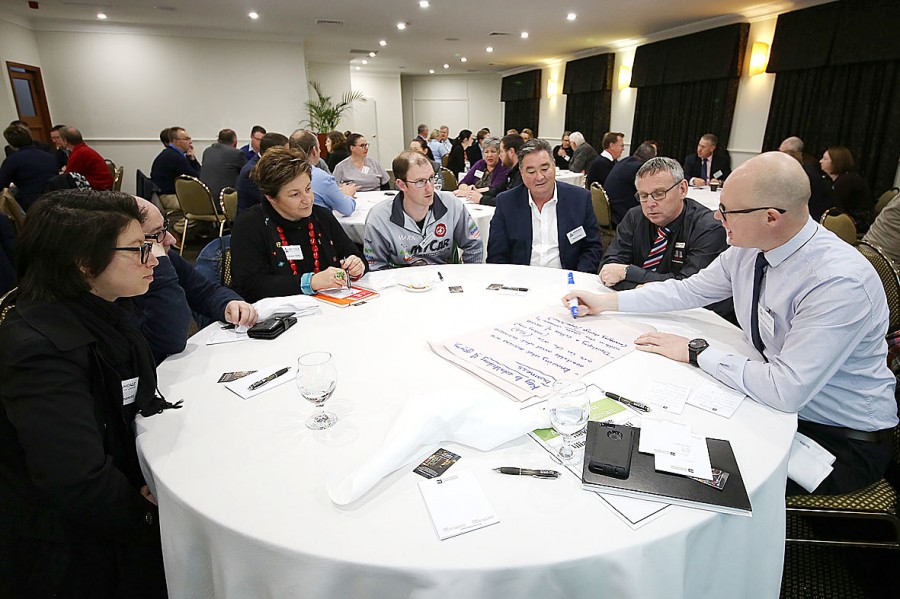 A sold-out business symposium has been told cooperation creates wealth and will be essential for major economic expansion in the Armidale region.
Approximately 80 business operators and other invited guests attended the Business Symposium Breakfast, held by Armidale Regional Council on Wednesday.
Armidale Regional Council Mayor Simon Murray said that the strongest message to emerge was the need for greater networking and a united effort between businesses large and small, Council and the wider community.
“Many of the participants expressed the need for businesses to work together, to encourage visitors and locals to spend money in the region,” Cr Murray said. “It can be as simple as referring customers to other businesses, such as accommodation houses directing people to local restaurants and visa versa. The symposium was a very successful way to foster that cooperation, by sparking discussions, developing connections and identifying shared opportunities.”
Councillor Murray said those connections and cooperation were particularly vital for small and startup businesses.
Guest speaker and international businessman Ian Mason pointed to the role of start-ups in the economic boom experienced by UK city Manchester - which has been the fastest-growing UK centre in recent years and had obvious parallels with the Armidale region.
Mr Mason and Cr Murray said the Armidale region’s close connection between businesses and their customers, which just “two degrees of separation”, was a major strength because it allows agile service delivery and fast-tracking of ideas and feedback.
Cr Murray said it was essential businesses did not focus their energies on competing with one another.
“While some competition is healthy to keep businesses on their toes, it has to be balanced by cooperation that recognises the potential for mutual gain and boosts the level of business activity as a whole. While you’re striving for a share of the pie, you do everything you can to make sure you’re starting with a bigger pie,” he said.
Initiatives proposed at the symposium included an information hub to help businesses, Council and the wider community work together.
Guyra’s ‘Brisk Trading’ proprietor Bronwyn Grills attended the symposium and said that she hopes that this is the start of something really amazing for our region.
“It is always good to talk to other business people and find out what we can do better,” Bronwyn said.
“There were some great ideas put forward and hopefully some of these ideas will come to fruition.”