New paws on the beat 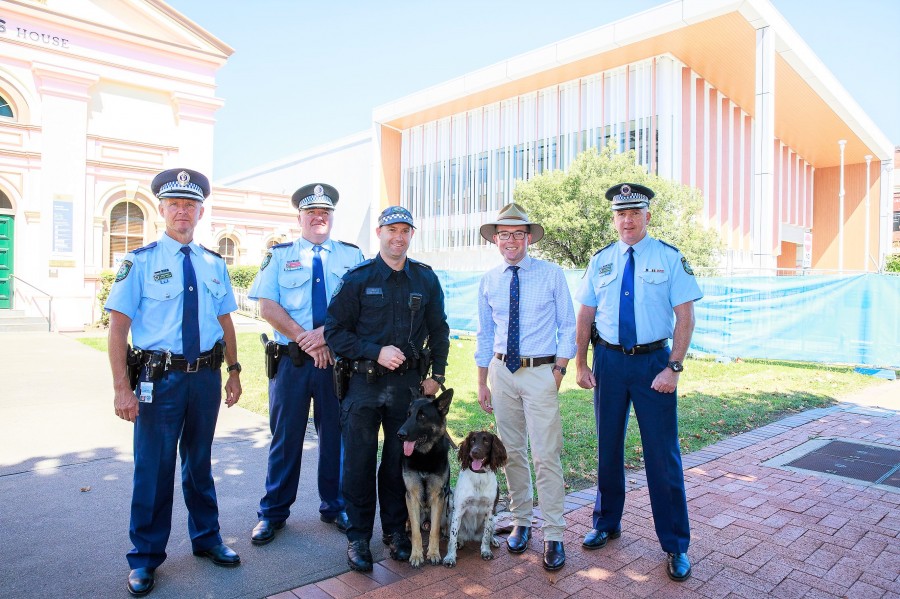 In what has been heralded as an ‘historic day in local policing’ the region’s first-ever permanent NSW Police Dog Unit officially has commenced work.
In 2018, Member for Northern Tablelands Adam Marshall initiated a campaign to have facilities to house a Police Dog Unit included in the design for the $16 million new Inverell Police Station.
“Until recently the New England Police District and the Northern Tablelands has never had its own dedicated dog unit to assist local police keep the community safe,” Mr Marshall said.
“Our Police have always had to ‘borrow’ police dogs and handlers from as far away as Coffs Harbour or Sydney, which requires many weeks of notice and planning.
“Having this new resource, that’s ours and based here in the middle of our region is a huge win for our men and women in blue whose ability to track down, arrest and charge would-be criminals is now greatly enhanced.”
Mr Marshall said the Northern Tablelands had secured two police dogs – a general purpose dog (Atlas) and a cadaver/drug detection dog (Wags) – which would give police greater ability than ever before to track down offenders.
“Police Dog Atlas and Police Dog Wags moved to Inverell at the start of January with their handler and since then they have made their presence felt, participating in a number of local police operations,” he said.
“Wags is one of only two cadaver trained police dogs in NSW, which is an enormous coup for us and will give our country police an extra resource when dealing with search and rescue operations or other more heinous crimes.
“NSW Police Dogs are amongst the best trained in the world and provide assistance in a variety of circumstances including searches and drug, firearms and detaining suspects.
“I believe the addition of two police dogs, based at Inverell, will be invaluable in acting as a deterrent for petty crimes such as theft, break-and-enter and trespass.”
“While the unit will be based in Inverell, it will be an extraordinary resource, which will be available for police in every community across the Northern Tablelands – from Mungindi to Ebor, up to Tenterfield and own to Armidale and Uralla.”