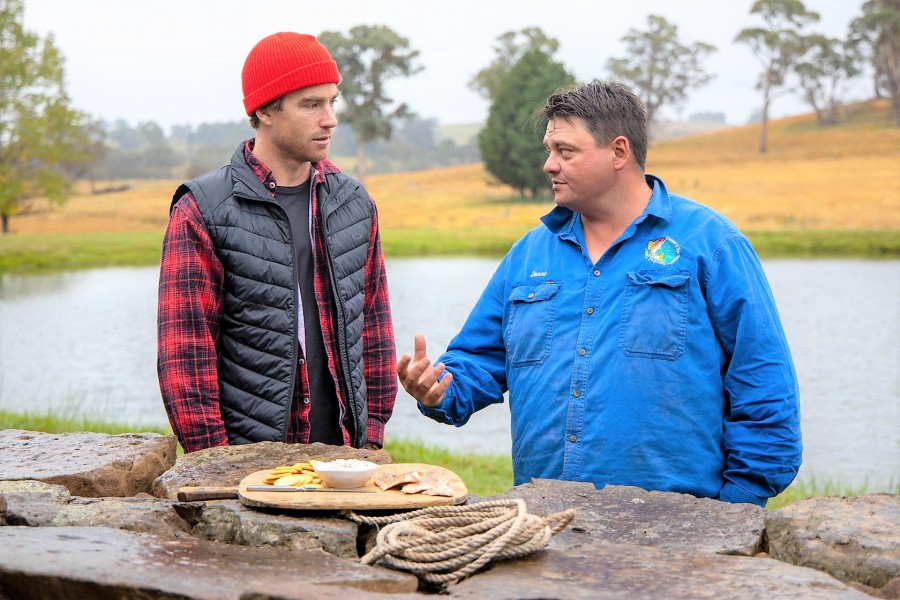 The Northern Tablelands starred on small screens across the country on the weekend with Glen Innes, Black Mountain, Matheson and Tenterfield included on Network 10’s Taste of Australia with Hayden Quinn, showcasing the region’s top tourism destinations and experiences.
Among the familiar faces featured in the episode was Dean Williams from Deano’s Springwater Smoked Trout at Black Mountain. Hayden Quinn visited the farm and tried his hand at fishing as well as tasting some of the award-winning products. Dean said that since the show aired he has already had a lot of people contact him enquiring about tours and camping, as well as other chefs ringing up to try his products.
Fossicking at the Waterloo Station, west of Glen Innes, a visit to Tenterfield’s Rochford Organic Garlic and cook up at Rangers Valley Beef were also featured in the show.
The primetime slot was part of a major State Government campaign to reinvigorate regional tourism. Member for Northern Tablelands Adam Marshall said that it was a significant opportunity for our part of the world to step out of the shadow of the recent drought and bushfires and showcase, to a national audience, the high-quality produce and diverse range of visitor opportunities on offer.
Mr Marshall said that regional tourism will have a significant role to play in helping local economies rebuild post COVID-19, and this was a fantastic platform to showcase the unique activates the region has to offer to an audience of 5.2 million people.
Taste of Australia with Hayden Quinn airs on Network 10 and the episode which went to air on Saturday is available to view online on 10play.com.au
Destination NSW’s Love NSW program is a multi-channel campaign that promotes NSW’s world-class experiences to inspire potential travellers through advertising and publicity, deals with industry partners and collaboration right across the travel distribution network