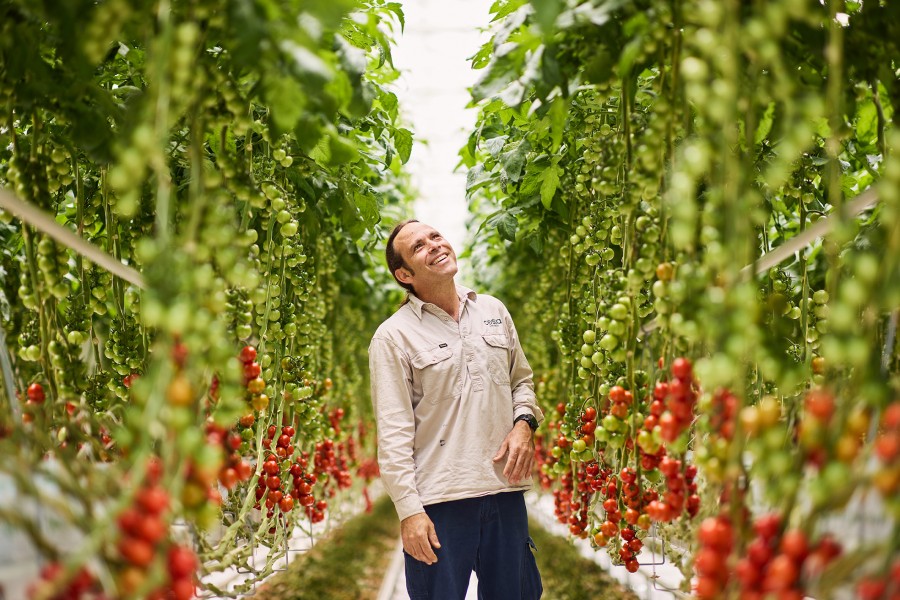 An economic and social impact report has highlighted the impact of the investment by the Costa Group in the Guyra area. The report, prepared by Deep End Services on behalf of Costa Group, provides a detailed overview of the glasshouse development, including history and investment, operations and employment.
The report reveals that more than $200 million has been invested in the establishment and ongoing expansion of the Costa tomato glasshouses in Guyra since 2005. The investment, including the $80 million extension of the New England Highway site completed in late 2021, brings the total footprint to 40 hectares plus a 2.5 hectare nursery.
The facilities combine hydroponic technology and vertical farming techniques with the capacity to produce around six times more than farmers can grow on the same amount of land.
The combined glasshouses, at Elm Street and the New England Highway, can produce up to 20 million kg of tomatoes per annum. This represents around 56% of the gross value of tomatoes produced in NSW.
More than 770 people are currently employed in the glasshouses, with peak employment for 2022 expected to be circa 810 people, with total salaries expected to be $46 million.
According to the report, there is considerable benefit to the local community flowing from the salaries with operations indirectly supporting a further 721 indirect full time equivalent jobs within the region and wider economy.
Water efficiency is a key focus, and the New England Highway site has a closed water system and is water self sufficient, while the Elm Street site doubled its capacity of recycled drainwater storage between 2019 and 2020.
Costa is also committed to reducing waste and promoting biodegradable packaging.
Highlights:
• 94% of workers live in the Armidale Regional Council area.
• Costa’s glasshouses use six times less water to produce 1 kg of tomatoes compared to Australian grown field tomatoes.
• Sweet berry truss tomato pack made from sugarcane mulch, which can biodegrade between 30 to 90 days, launched in 2020.
• End of crop composting scheme redirected up to 2,200 - 2,500 tonnes of waste from landfill.
• Annual $10,000 Costa Tomatoes Tertiary Scholarship is offered to residents from Guyra, Armidale, Glen Innes, and Inverell.