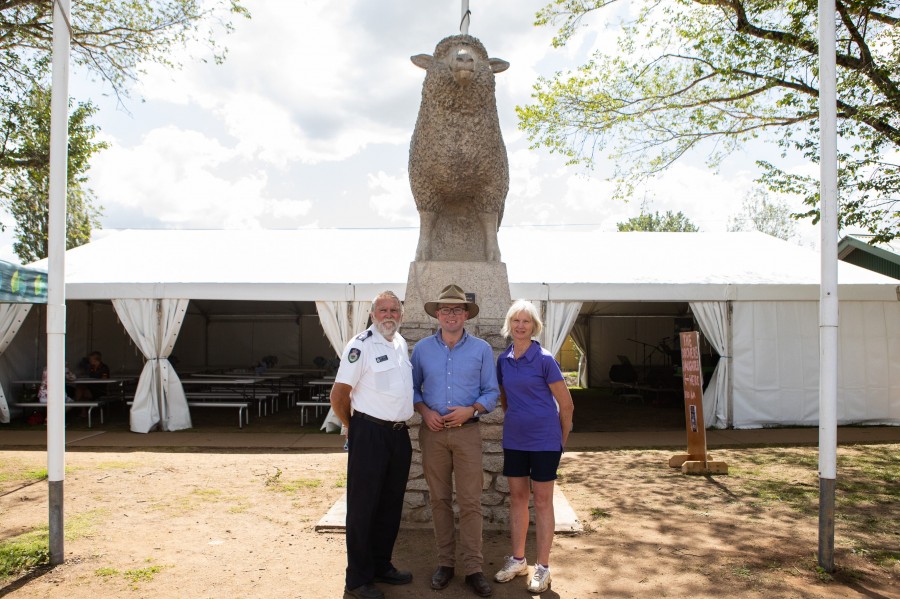 The Guyra Lamb and Potato Festival committee are celebrating news that they have received a $130,000 State Government grant to help construct a permanent undercover performance and dining area in Rotary Park.
The new shed will provide a permanent and secure venue for musicians and diners and remove the need for the festival’s organising committee to spend thousands of dollars each year hiring a giant marquee.
In previous years, up to two marquees have had to be hired, to provide shelter and undercover seating for patrons at a cost of $6,000 each. The installation also involved many volunteer man hours to put them up and take them down
Member for Northern Tablelands Adam Marshall said that the grant will allow the construction of a 10 metre by 18 metre shed to be built on a concrete slab directly behind Guyra’s famous Big Lamb.
“The permanent building will be equipped with plastic pull down shutters which can be utilised during Guyra’s torrential summer storms or opened during a sweltering January afternoon,” Mr Marshall said.
“Each year the Lamb and Potato Festival is a quality showcase of what the Guyra area has to offer and hopefully this new building will support the committee to grow and develop the event into the future.”
Lamb and Potato Festival President Steve Mepham said the building would greatly reduce the workload for volunteers during the annual 13-day event.
“Like most committees in bush communities, we only have a relatively small volunteer base with many people taking time away from their farms and businesses to lend a hand,” Mr Mepham said.
“This new shed will be an absolute Godsend, because it will mean we don’t have to spend half-a-day before the festival putting it up and another half-day pulling it down again.
“The festival runs on the smell of an oily rag each year and so the $6,000 we save on hiring a marquee will be able to be spent improving other facilities like our kitchen.
“I cannot thank Adam and the State Government enough for their support of the Lamb and Potato Festival and hopefully come 2021 our big new shed will be built and ready for use.”
This funding was made available through the State Government’s Community Building Partnership Program, which will see $300,000 spent on 12 different projects across the Northern Tablelands.