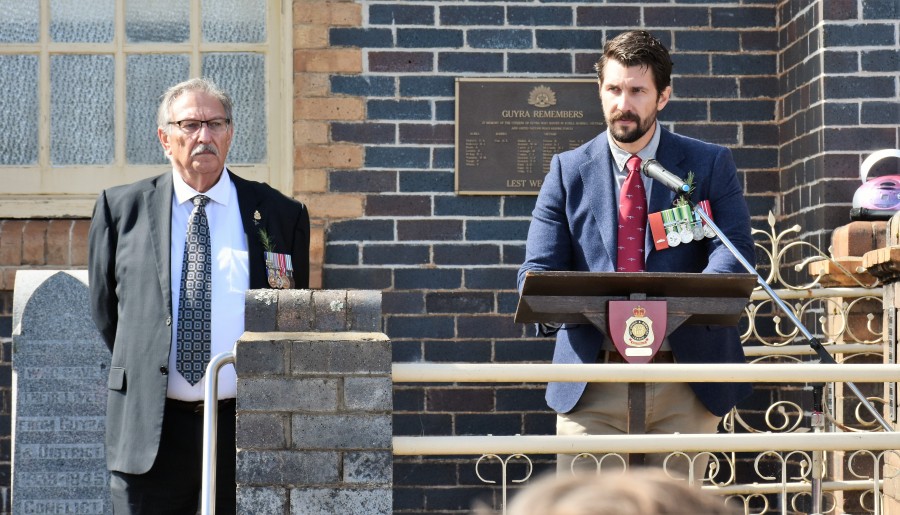 The Gallipoli assault was intended as part of an effort to seize the Dardanelles, and in doing so open up a maritime passage to support a push to the Turkish capital, Constantinople. In March 1915 an effort to push through the straight had failed, and as a result the landings on the other side of the peninsula were planned. As we know, it was not successful, and resulted in the deaths of many allied troops, including over 8700 Australians by the end of the effort there, some 650 on the first day. Amongst the dead were a number of boys and men from Guyra.
When you consider the impact to the community of one young person’s death, let alone many, it gives pause for thought. It is the origins of Anzac Day.
I occasionally discuss with my young children the topic of Anzac Day. There is no neat fit for what it is, and I would observe that over the years it has evolved, and will continue to do so. I have no real issue with that, as long as it does not become a “holiday”. I would offer the view that Anzac day should be three things, a day of remembering, a day of reflection, and a day of inspiration.
We remember our dead
Men would have initially signed up to serve the king and empire, looking for adventure and glory. They were sold a lie. There is no glory in war. It is dirty, ugly and hard, anyone who says otherwise is lying or doesn’t know.
At first many of the volunteers were adult men, in their 20’s generally, prime and healthy. The treasure of a young nation. as the war dragged on the empire became desperate for more soldiers and over time boys were accepted in to service. So many were lost in the effort, and have continued to be over the years. Those killed in combat share
The war dead, regardless of which conflict, should be remembered. They died so that others wouldn’t, so that in the big scheme of things we could get to here. The memory of them is all that remains; and for some, maybe some of the names that I mentioned before, there may be no memory at all.
A day of reflection.
I knew a simple soldier boy
Who grinned at life in empty joy,
Slept soundly through the lonesome dark,
And whistled early with the lark.

In winter trenches, cowed and glum,
With crumps and lice and lack of rum,
He put a bullet through his brain.
No one spoke of him again.

You smug-faced crowds with kindling eye
Who cheer when soldier lads march by,
Sneak home and pray you’ll never know
The hell where youth and laughter go.
As is well captured by Siegfried Sassoon’s poem, “suicide in the trenches”; war is hell. There is not a level or scale of it that does not bring the worst of humanity to the surface. It is pervasive for those in it, and the casualties are not always felt facing the enemy. I have known many, too many, who have taken their own lives, and some who have died in the fight. Neither is better, the result remains the same, and we would rather they were still with us, all of them.
As we live through a period of stark instability, where war rages globally, it is easy to think that it may be a good idea to join in. Fight, fight for the ideals that we shout about via social media, safely in our lounge rooms. Support that vocal politician who foments disruption and courts conflict (but will not see hardship if it goes wrong). I am not saying that war will never, or should never happen; but we should be damned sure it is worth it. As such, Anzac day should provide us a touch point, a memory of the human cost. Gallipoli was not well executed, but to assume that soldiers’ lives would not be spent in the same cold hearted way again would be wrong. We should remember, and make good choices, ask the right questions, and demand the right behaviour of our leaders lest we wander into war again.
A day of inspiration
25 April 1915 gave birth to the legend of Anzac. But the real legend was not in the landing, though bravery was shown. It was in the hard days and months that followed. In the local boys who looked out for each other, fought together, and died together. Cameron and Moore, both from this little town in NSW, died on the same day, probably in the same action.
The Anzacs were not heroes, they were young men, naïve and adventurous, with no real idea of the horror that awaited them. It made their death at Gallipoli, the Nek, Lone pine and in the daily grind of trench war all the worse. They trusted in the idea of adventure and honour for the empire. Despite the terror they cracked on. Individually some were brave, but many were not. Collectively they were fantastic. As a group of Aussies they fought through fear, showed resilience, tenacity, good humour and loyalty to their mates. They didn’t give up. They did heroic things. They grew into giants in our nations story, and established a legacy. It is a worthwhile legacy, and one we should hold dear. It should rightly inspire us in our approach to life as Australians, shape the values that we espouse. Values that we foisted on the shoulders of the Anzacs to justify their sacrifice, and we should now maintain in their honour.
Some of them are captured on the windows at the tomb of the unknown soldier in Canberra and I think they are pretty close to capturing the ideal of Australian character:
RESOURCE, CANDOUR, DEVOTION, CURIOSITY, INDEPENDENCE, COMRADESHIP, ANCESTRY, PATRIOTISM, CHIVALRY, LOYALTY, COOLNESS, CONTROL, AUDACITY, ENDURANCE, DECISION
There is goodness in this. In the idea of the Anzac, it inspires and gives us something of a compass, the larrikin Aussie who will keep going with a smile, who will fight fair and smart, but will fight to win and is happy to take on the bigger bloke when they are in the wrong or to stand up for a mate. They are good ideals, a valuable ethos. We should celebrate the values of our society.
War is a human endeavour and has a human cost, no matter what, and there is no service without sacrifice. On Anzac day we rightly stop to remember that sacrifice, of all who serve.
To the families and friends of veterans, who have supported and continue to support them, I thank you. To my fellow veterans, I humbly thank you for your service.
Lest we forget.