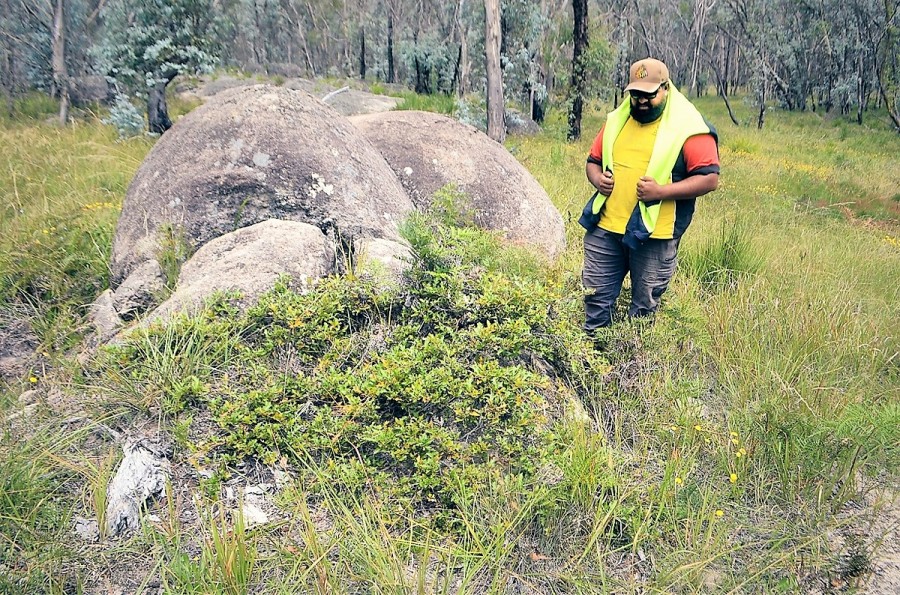 A rare study of Aboriginal cultural burning in southern Australia has found the practice as effective at fuel reduction as conventional hazard reduction burns, while being much less harmful to native plants than bushfire.
Monitoring of an indicator species, the threatened Backwater grevillea, established that cultural burning had a relatively minor impact on mature specimens. A bushfire that ripped through part of the study zone in 2019 killed 99.6% of existing grevillea plants.
“Wildfire, hazard reduction and cultural burning all reduced standing fuel load by about the same amount, but only cultural burning left a multi-age population of grevillea,” said lead researcher, University of New England (UNE) cross-cultural ecologist Dr Michelle McKemey.
“It is more evidence that cultural burning practices have an important place in managing our natural heritage as we try and reckon with the effects of climate change.”
The study was conducted on Wattleridge Indigenous Protected Area (IPA) in forested escarpment country north-east of Guyra, NSW, by the land’s Indigenous owners, the Banbai nation, and a team of researchers led by Dr McKemey.
For Banbai nation elder, Lesley Patterson, the advantages of cultural burning are clear. “You know your canopy and the older plants are going to survive if you do low intensity burns. It does the country better, and the bush doesn’t take as long to come back as it would with a bushfire.”
The multi-year project drew on Indigenous and scientific concepts to investigate how cultural burning affected local ecology, compared to conventional hazard reduction burning.
Cultural burning involves typically low-level patchwork fires conducted at times calculated to support the life-cycles of key plants or animals.
Hazard reduction burns involve setting controlled fires over specific areas in cooler seasons, but without cultural burning’s focus on managing particular species and typically over much larger areas.
Bushfire unexpectedly became part of the project when a branch of the huge 2019 bushfires, which burnt about two million hectares of Eastern States forest, penetrated the Wattleridge IPA.
The near-total loss of mature plants in the heat of the summer bushfire provided a practical illustration of the value of cultural burning as a tool for fire and species management, Dr McKemey said.
The wildfire also lost some of its damaging intensity when it reached the zone of old cultural burns.
Dr McKemey hopes that Indigenous people and ecologists are only at the start of a widespread collaboration that will see the return of widespread cultural burning to southern Australia.
Following an appearance on Gardening Australia, the Banbai rangers have been invited to undertake a number of cultural burns in national parks and on private property. On their own land, cross-cultural monitoring of the Backwater grevillea has been extended and expanded and will help to inform the adaptive management of the IPA.
“There are a number of cultural burns planned by different Aboriginal groups in the New England region this year,” Dr McKemey said. “In some places it’s the first cultural burn that has taken place for more than 50 years.”
Every cultural burn also involves oversight by Rural Fire Service (RFS), partly as a knowledge-sharing exercise and partly as insurance.
“Every cultural burn in southern Australia builds on our understanding of fire as an ecological and cultural tool,” said Dr McKemey. “With each burn, we take a step closer to having a much more nuanced and potentially powerful approach to fire management.”