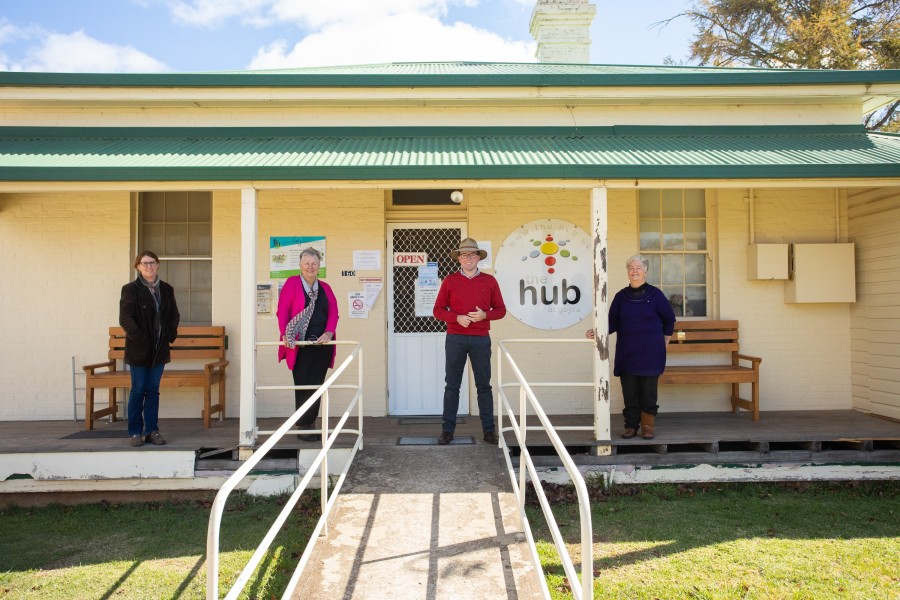 Work is set to start on the expansion of Guyra’s Neighbourhood Centre, The Hub, with Armidale-based modular builder Uniplan commissioned to deliver Stage 1 of the project.
It has been a long wait for the centre with a $400,000 State Government grant originally announced two years ago. The grant allows for a tripling in size of the centre, enabling it to expand its reach to people in need of critical support and advocacy in the Guyra district.
Stage 1 of the project will see three modules added behind the existing building to provide new office space, community meeting rooms, computer area and storeroom. Additional public amenities with disabled access will also be included, and the facility will have a kitchen for the first time.
Demolition works at the rear of the building will take place in June with the new modules expected to be delivered to the site and installed in August.
Member for Northern Tablelands Adam Marshall said that it has been a long road to this point for The Hub’s Co-ordinator Chris Hietbrink and her hardworking team.
“This Hub is such an important service which connects Guyra’s most vulnerable residents with both government and non-government services,” Mr Marshall said.
“I want to thank the community for its patience in waiting for this project to be delivered and I look forward to an official opening in October.”
Co-ordinator Chris Hietbrink said the recent drought and disastrous bushfire season had highlighted how important this extension is to the community.
“For the past two years our facilities have been stretched to the absolute limit, with people wedged into every nook-and-cranny while we provided them with emotional support and help to apply for government assistance,” Mrs Hietbrink said.
“Under our current footprint, it has not been uncommon for every consultation space to be filled, meaning there is no privacy for those in distress who walk in off the street.
“The additional office spaces in the extension will go some way to helping us create a more empathetic work area.
“I’m also very pleased provisions have been included in the new amenities to allow an accessible adult change facility to be installed in the future.
“Currently there is nothing of this kind between Newcastle and Brisbane, on the New England Highway and I believe Guyra is perfectly situated to offer this service to people in a wheel chair who are having to travel.
“I want the community to know that during construction, The Hub will still be operating from the front of the existing building, and I urge people who need help to still come in.
“We are so close to getting construction underway and I want to thank Adam for everything he has done in supporting us during the process.”